The workshop took place from May 14 to 18, 2018 during the Arts Week with the pupils of the two 6th grade classes divided into four groups. It was built in parallel with the Orchard project, a vegetable garden already established with the students and aimed at developing the school’s wasteland and inner patio. The ground for working with students is based on the notions of good manners and know-how and that of technique and care. They are at work and at stake in all spheres, worlds and disciplines on a daily basis and through History and its aesthetics. The workshop Le Jardin d’Ipotêtu focuses on various problems and experiments that question the notions of scale and mode relationships, techniques and means of representation in space (drawings, model, construction of the greenhouse on a 1:1 scale on wasteland, 3D images) and is conceived and articulated in a constant relationship with plants, gardens, nature and its cycles and the sounds of its worlds.

In preparation for the workshop, the artist Lyn Nékorimaté designed the model of a greenhouse that was then built on a 1:1 scale on the wasteland of Pierre Emmanuel High School with the precious help of Maëva Changeur, a few people and high school pupils. Called The Musical Greenhouse, it is made of recycled materials, pallets and translucent tarpaulins. Its implementation began on May 2 and ended on May 9. It was a place for thoughts and discussions with the pupils during the workshop and was then dismantled.

The workshop week was split in two to allow pupils to identify two processes of reflection and plastic experimentation.

The workshop begins with a visit to the wasteland and the musical greenhouse followed by discussions about the relationship of scale, the relationship to the cosmos, the cycles of the seasons, cardinality and orientation, recycling and self-construction and the notion of taking care of things. Back indoors, all the students took off their shoes before entering the two small rooms where the workshop was held simultaneously. Firstly, the discussions on the wasteland were continued. The questions and problems of representation were observed under the prism of the tool and technique, the model and its representation but also by questioning the notions of spheres, universes and modes of representation. Then we explored the notions of good manners and know-how, first of all through the themes of attention and care that we extended to the questions of the symbolizations of diseases in different peoples or ethnic groups. All of them were introduced to the principle of pharmacongreek, refering to both the remedy and the poison, followed by a reflection on the visible and the invisible to lead to questions about the imagination. Then the group was divided in two and the students worked simultaneously in two adjacent rooms. In the Ipotêtu studio and supervised by Maëva Changeur, each of the students chose a potted plant, planted by them some time ago, and scanned it using the Sense 3D scanner. These 3D plant models would constitute the plant environment of the work “La forêt d’Ipotêtu” in the online museum. Other students were invited to draw and represent the plant as they wished, but also to consult selected books and documents on permaculture, self-construction and architecture.

In the next room with Lyn Nékorimate, the students installed on the ground around a single plant were invited to paint it, from their own point of view. The painting was made of natural materials, water coloured with spices and vegetables. The palette offered tones of: Black = charcoal / Grey = ash / Green = spinach / Red = beetroot / Purple = red cabbage / Brown = wasteland earth / Yellow = curry / Orange yellow = turmeric (powder + root). The sound of this practice was recorded. Discussions on the therapeutic properties of spices, roots, leaves or essences were initiated. In doing so, each one constituted a short sentence picturing their relationship with nature. The sound recording of these sessions and the students’ sentences were the material of the work The forest of Ipotêtu.

For this second half of the week, the work focused on sound space and silence, voice and writing a score without using notes. The students were invited to draw with a coloured felt pen on an A4 landscape sheet of paper, their own score in order to interpret it vocally for the recording scheduled at the end of the session. The chosen colour indicated the voice timbre and the drawn graphic design constituted the score. The workshop was structured around singing exercises and basic theoretical, historical and referential elements around sound and music. Then the work 4 minutes 33 by composer John Cage was presented to them.

After the break, the workshop restarted in the courtyard with physical and breathing exercises resulting from the learning of lyrical singing but also yoga and martial arts. So well warmed up and back in the room, we proceeded with the recordings. In tribute to John Cage, we recorded 4 minutes 33 seconds of silence for each of the four groups of students, followed by the sound recording of the performance of each score by their author. These sound documents were also the sound material of the work “La forêt d’Ipotêtu”. 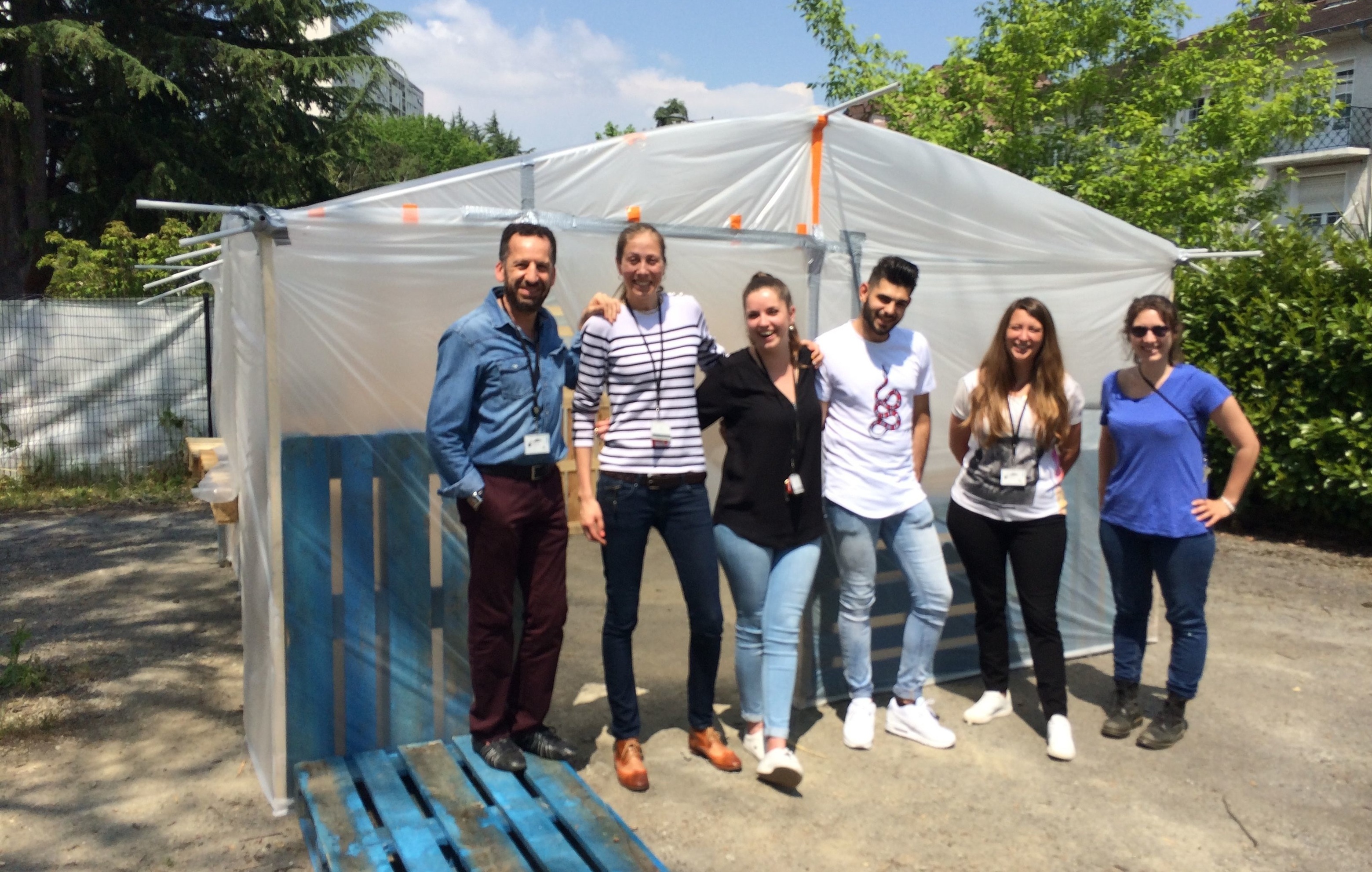 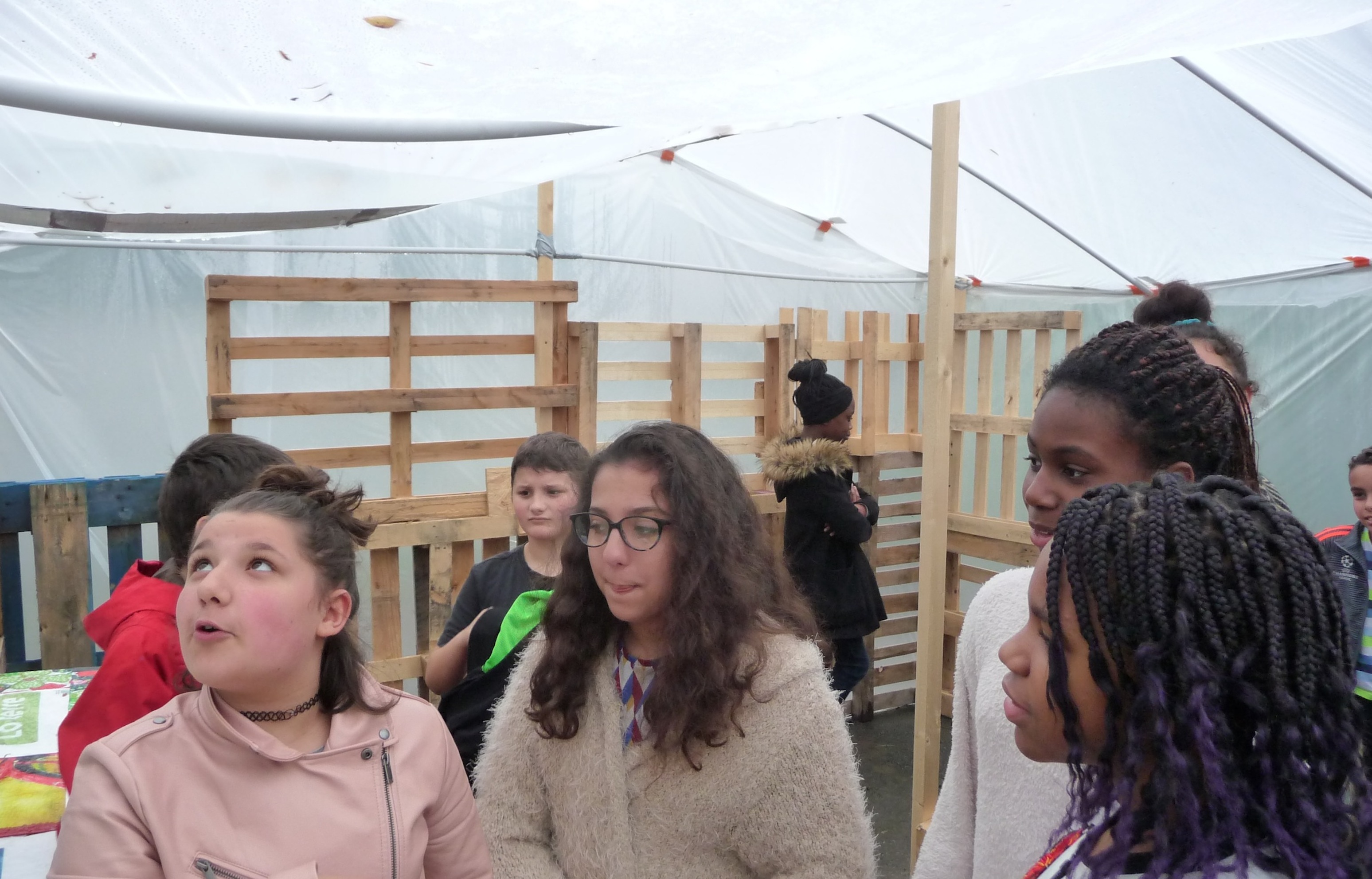 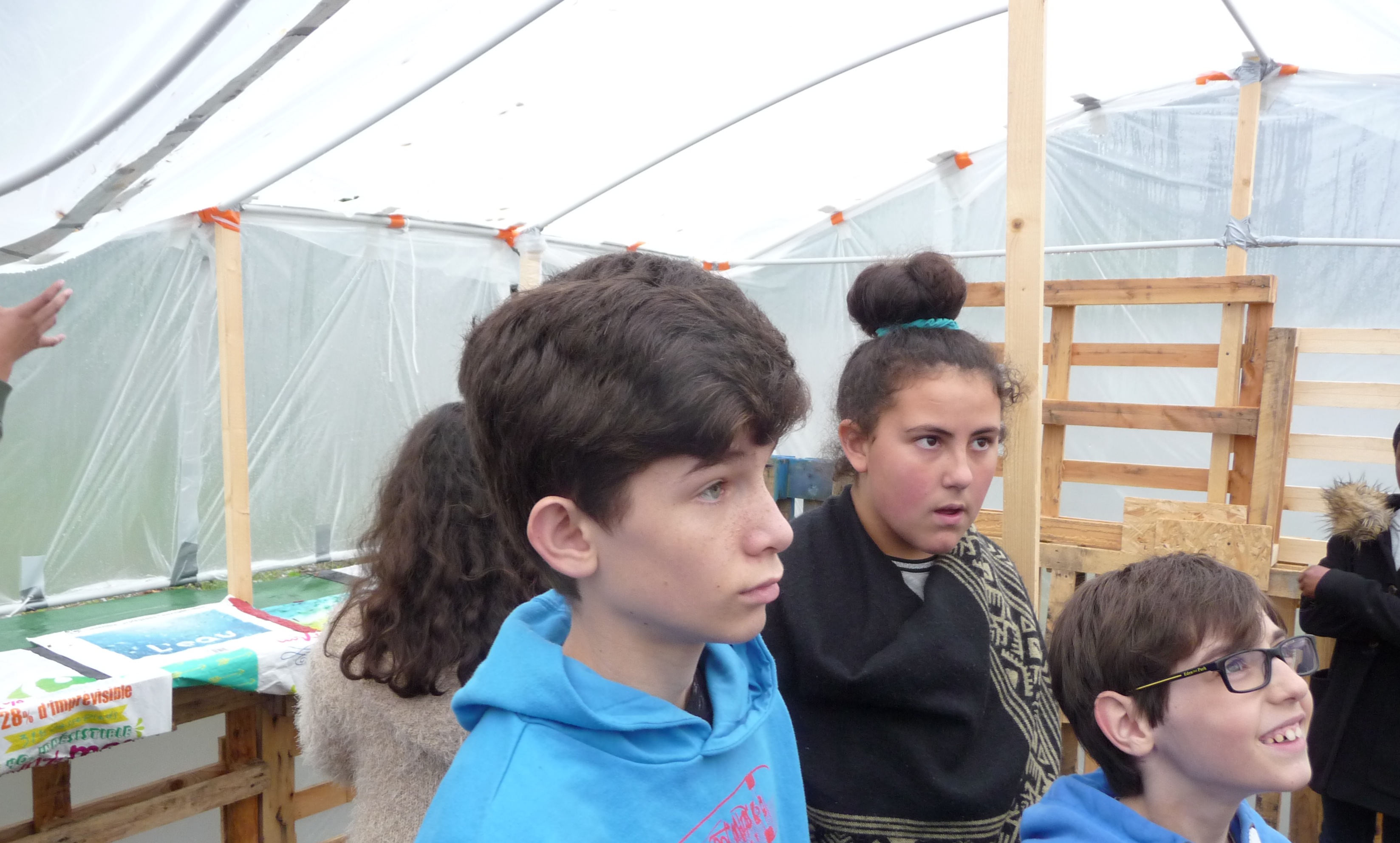 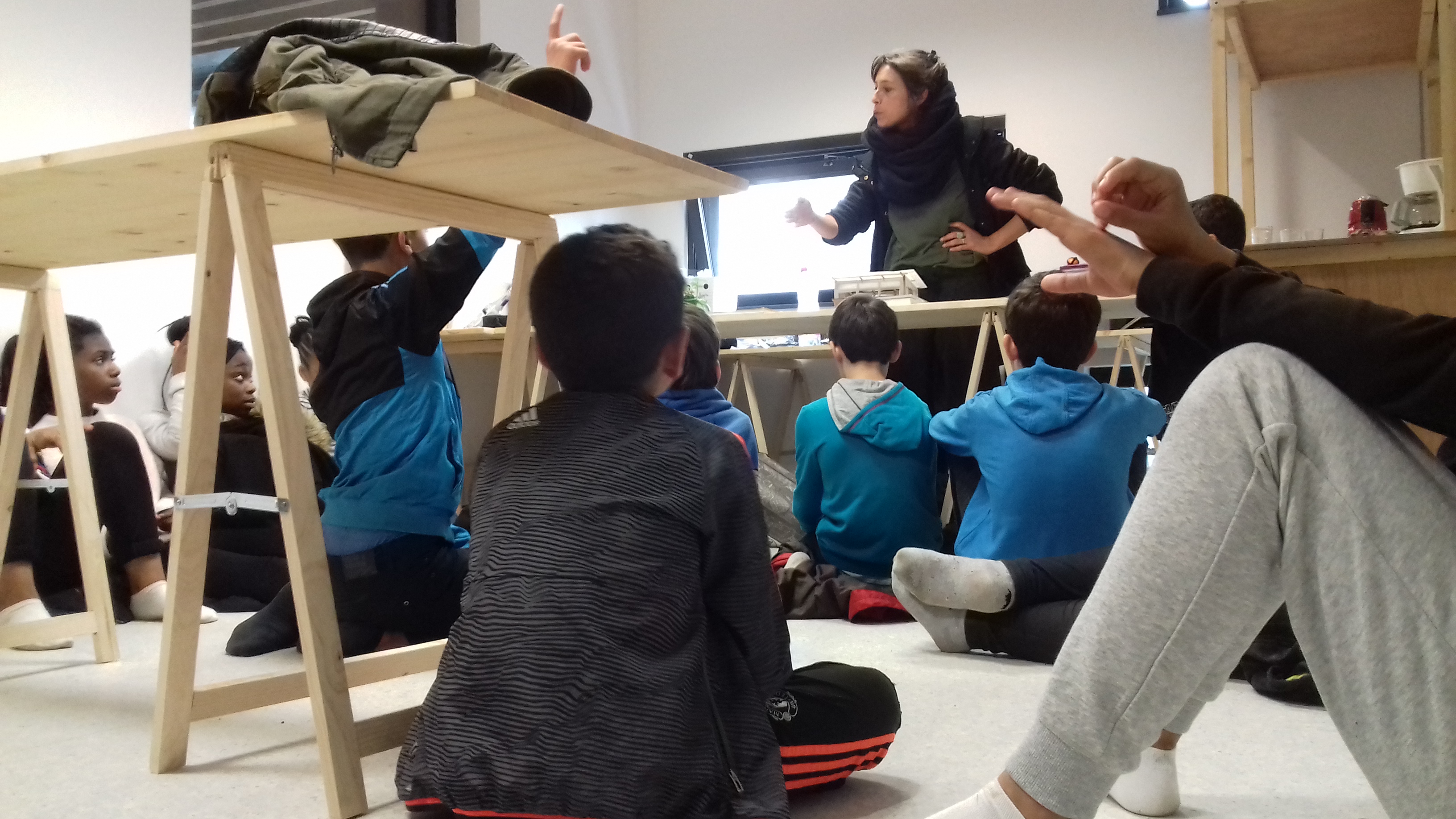 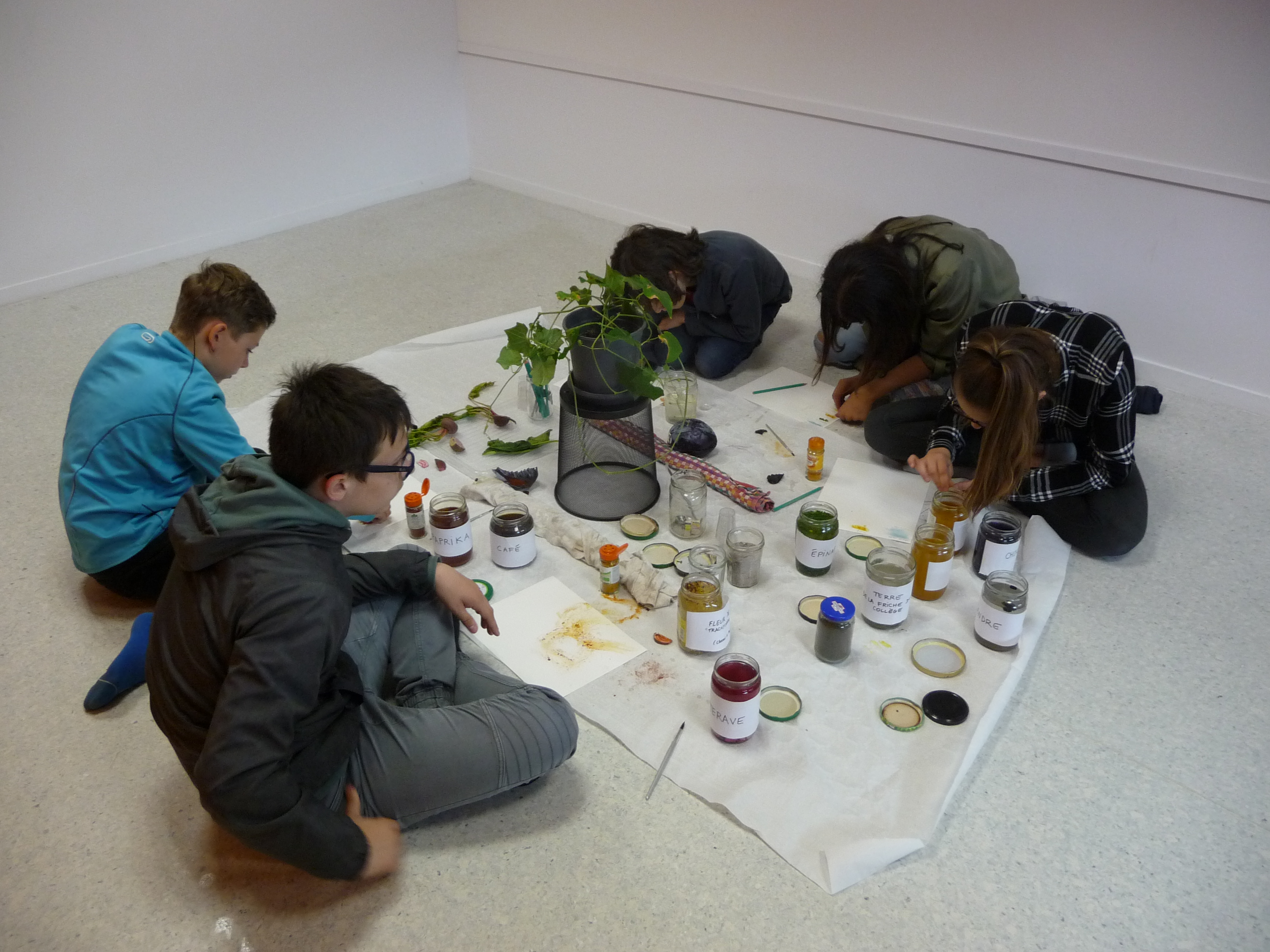 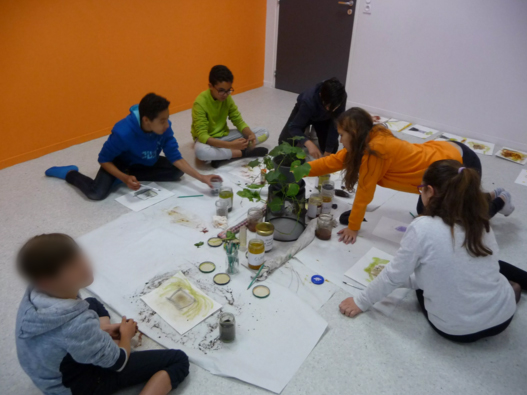 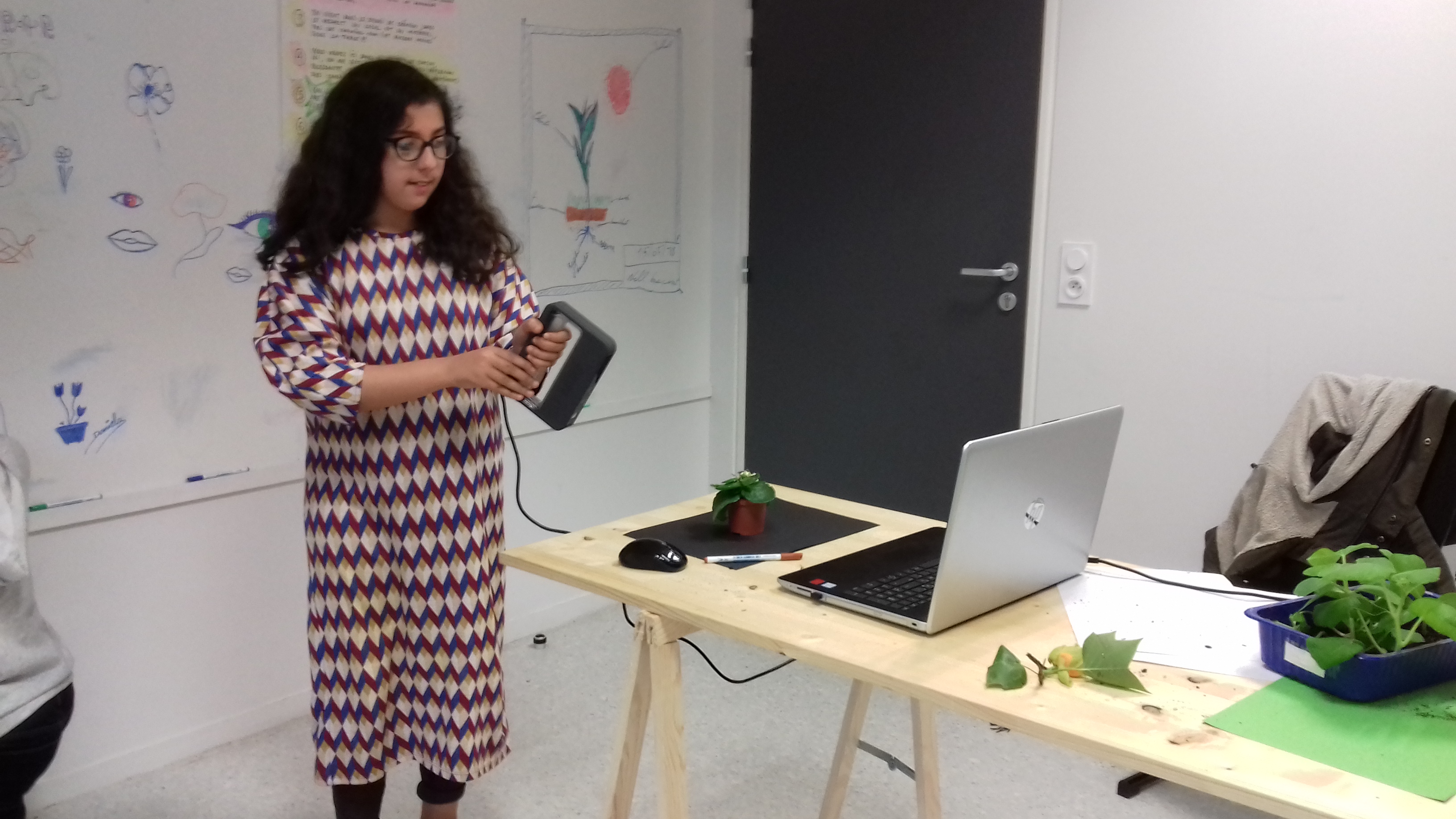 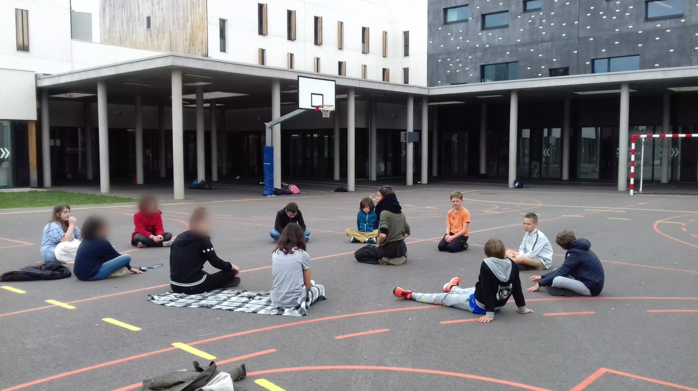 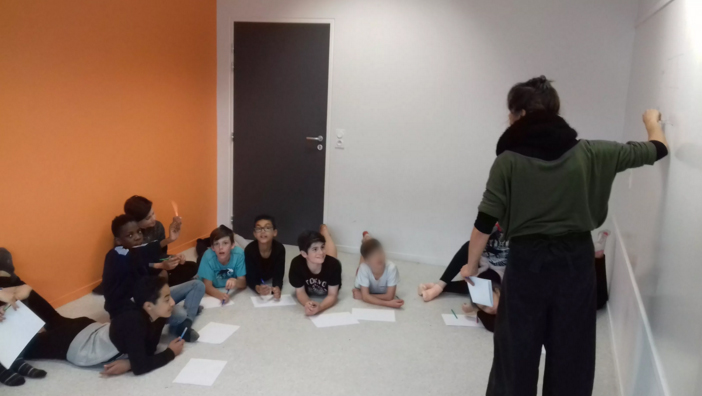