A film can reveal to us, like ghosts from the afterlife, performances from the past, gestures of actors who are no longer, in settings that have disappeared forever. When a film is lost, as almost 80% of silent films have been, it is twice haunted, because a lost film is a work relegated to limbo, an unfinished narrative. It is condemned to wander in profane lands, an unfortunate spirit which is refused to project its light into cinemas. Driven by a desperate desire to come into contact with these sad ectoplasms, which once amazed the delighted retinas of the public with their bright lives, we have, like charlatans, impostors, fraudulent mediums, imagined creating adaptations to these stories. Because we all want to be duped terribly. This is the nature of our relationship with cinema: “We want to be fooled, cheated, scammed! ». (Guy Maddin)

This workshop proposes the making of short films staged with the students. We filmed several sequences. These very short films will be visible simultaneously thanks to a permanent multi-screen diffusion in the virtual space of the Ipotêtu Museum. The pupils are the performers and authors. We brought with us our “minimum creative accessories”, which are works that belong to us and which, for the occasion, were used to be integrated into the films. The video schoolbag, the drawing machine, the exhibition exploration vehicle. Inside the films produced, these “accessories” must become special exploration vehicles, used to travel through the high school, through time, reality and play. Like prothesis, their role is to support and sustain the young performers’ play, to transfigure them, to transport them to another universe. This universe is a hidden side of the high school, a parallel world that coexists with the world known on the surface and gives us the possibility of free expression through the reinterpretation of everyday life.

Course of the workshop

The workshop took place at Pierre Emmanuel College from Monday 26 to Friday 30 November 2018, in collaboration with the teachers: Julie Durieu, Marie Falgas, François Calavia, Juliette and Marine (civic services). The workshop was set up in the spaces of the multi-functional room and occasionally, for the filming, in all the spaces of the high school.

After the presentations and oral explanation of the content and purpose of the workshop, we watched the film 3017 that Yu-Ting and I made together. This film was shot in a village in the Creuse and interpreted by the inhabitants. Then a debate was initiated, which aimed to make the pupils understand how it was possible and allowed to make a film with non-professionals, having in mind the idea of making a fiction. Then we trained them in the handling of the equipment; use of the tripod, camera and lighting. Each was then assigned roles, according to their affinities, through the practices of the film industry. Group constraints did not allow us to run a film over a week, operators and extras had to alternate from one group to another. So we agreed together to produce autonomous sequences that would navigate around a common story invented and inspired by life in the high school.

Without a previous scenario, we imagined and produced the situations.

The students had to find the premises in the school and created situations where they became both performers and directors while seizing the means and objects at their disposal. We guided them in their choices by making them aware, each time, of the visual effects and possible faking directly to the camera in the style of Georges Méliès. 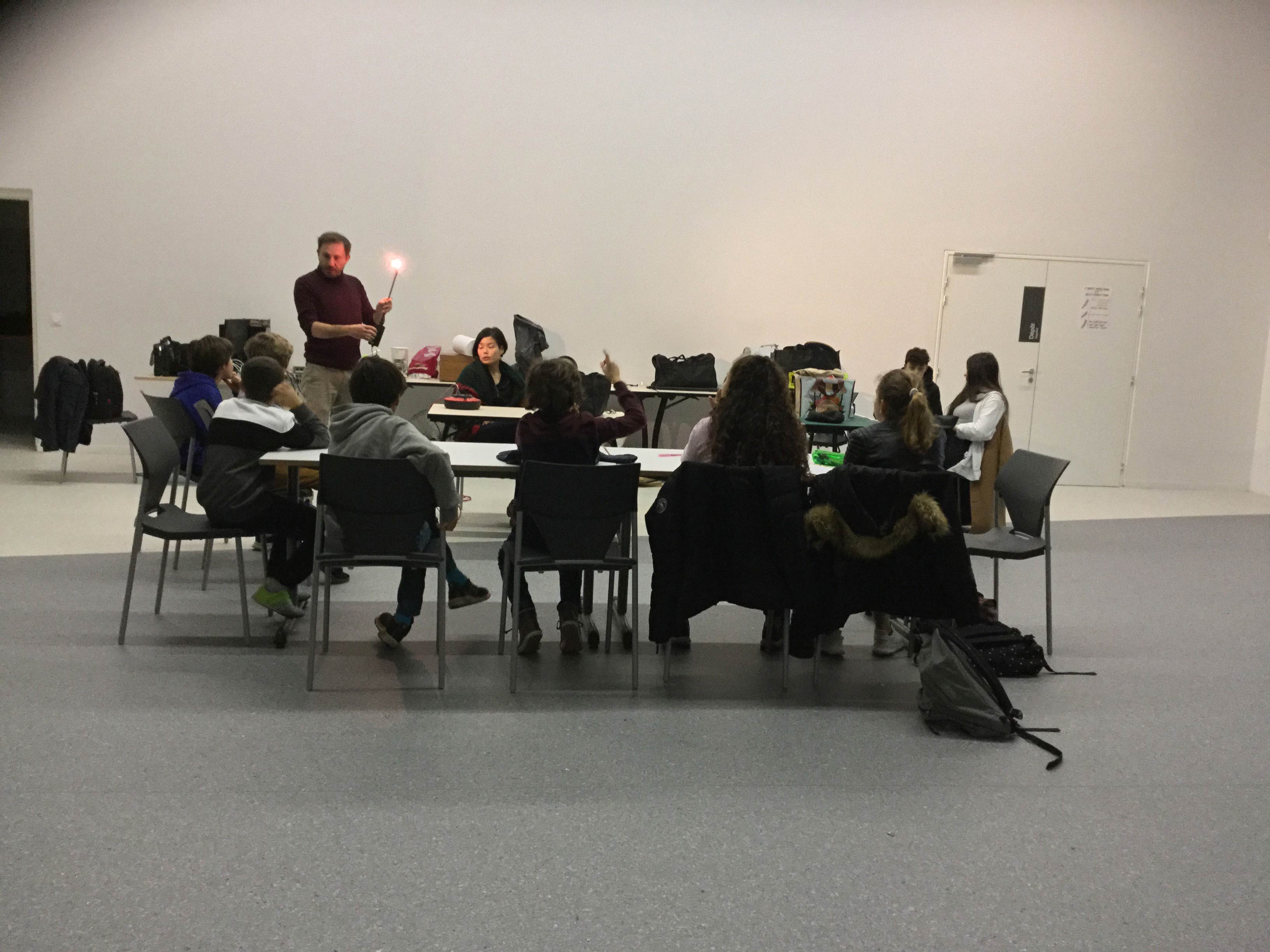 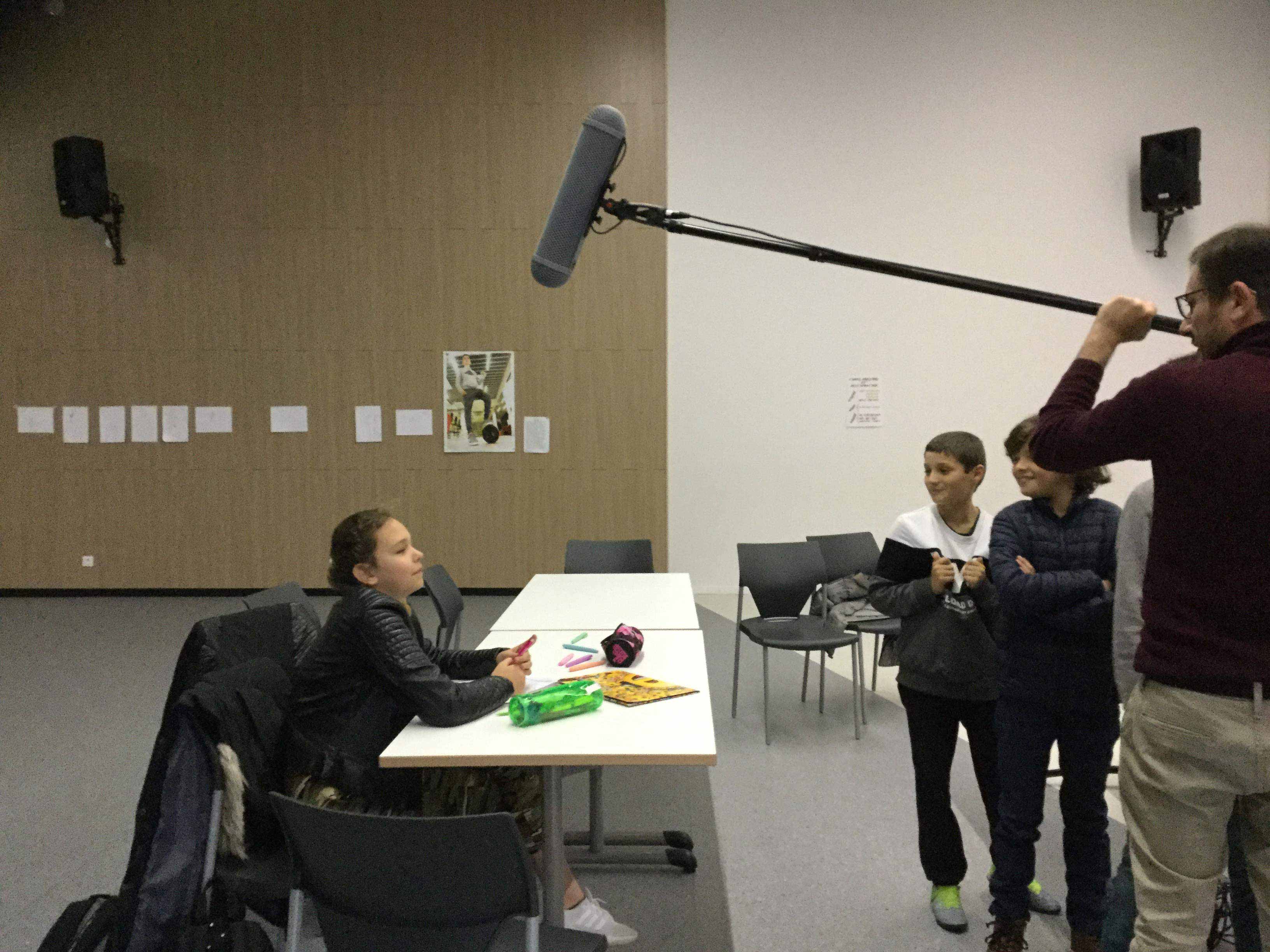 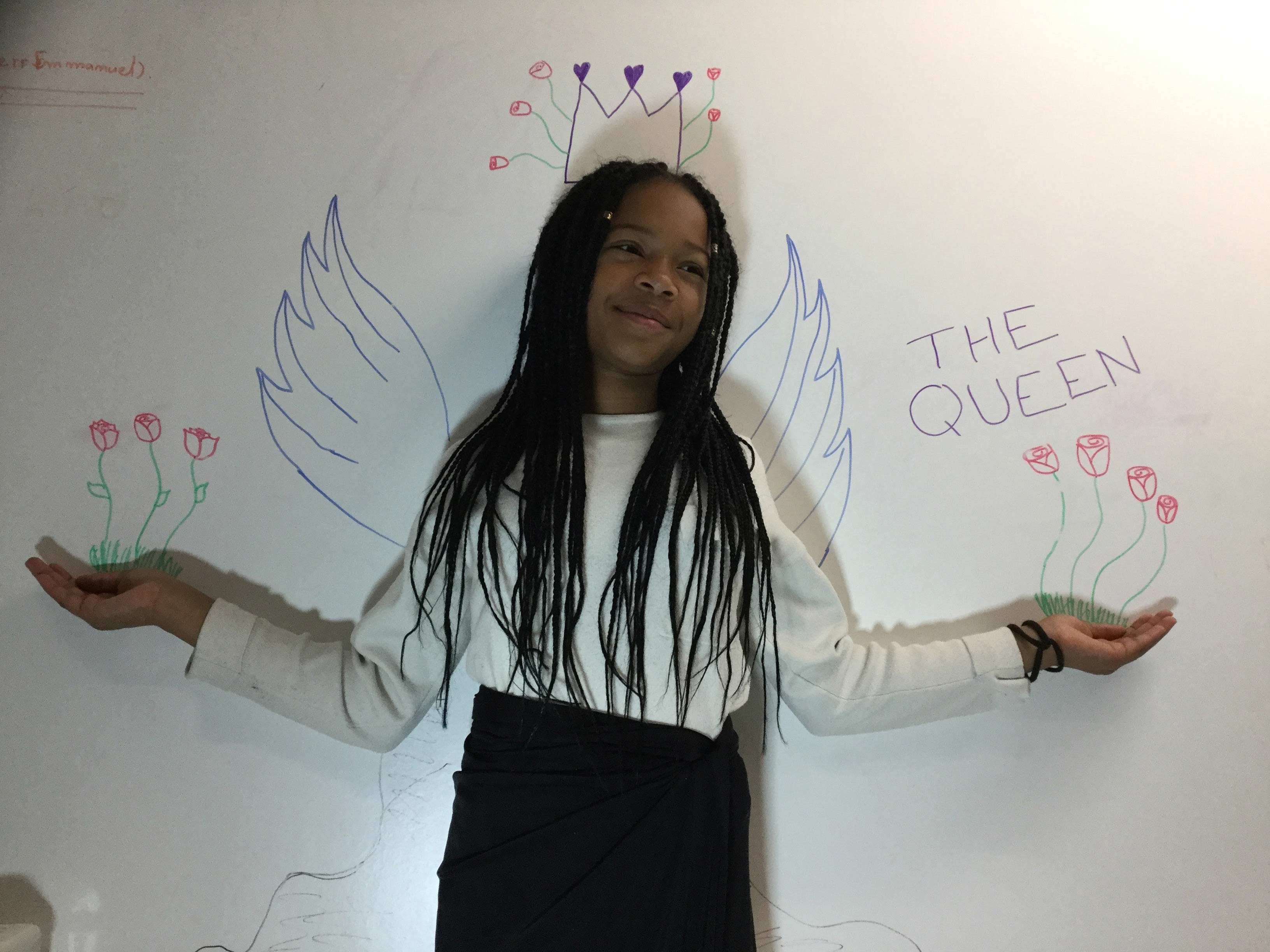 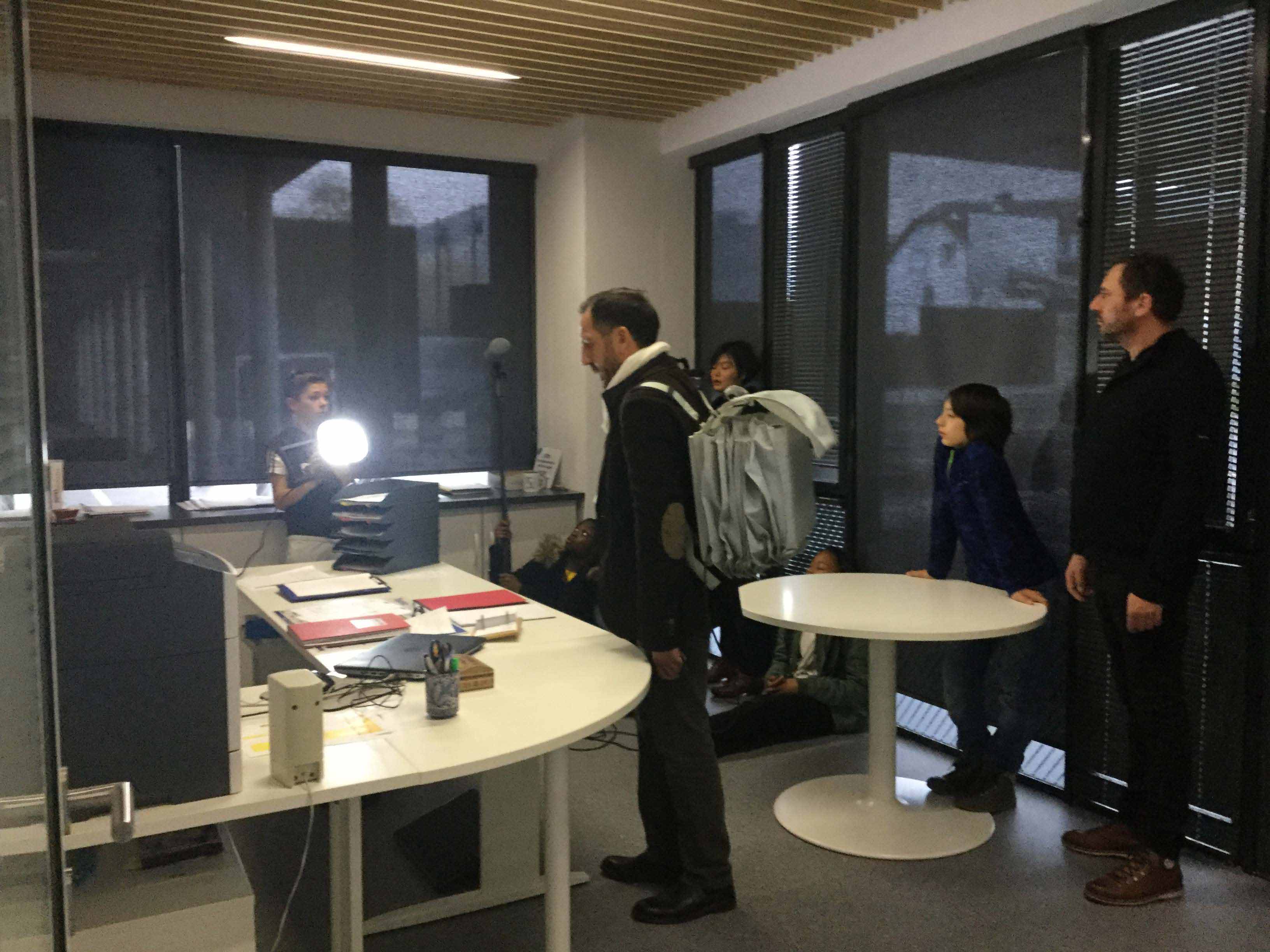 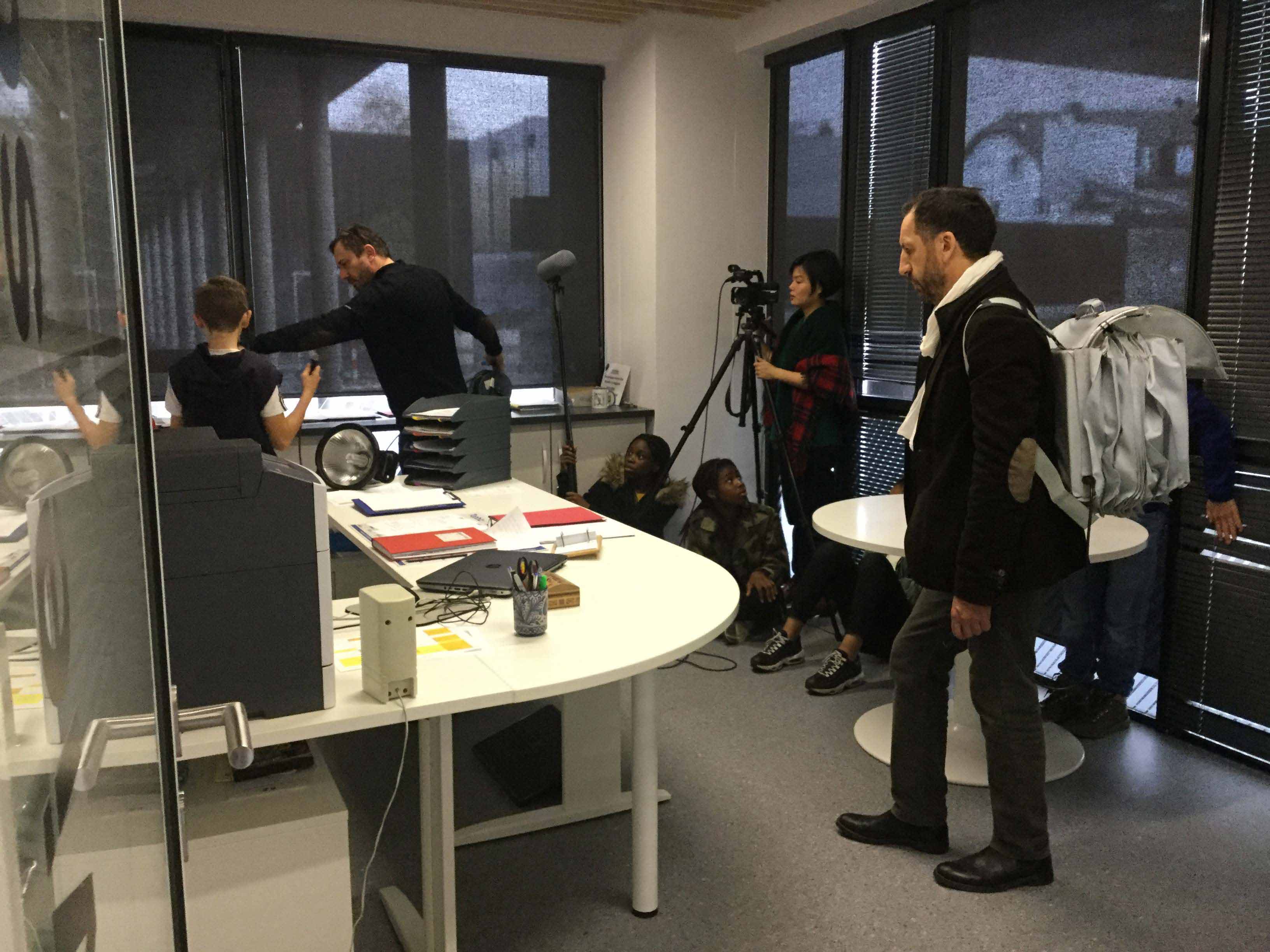 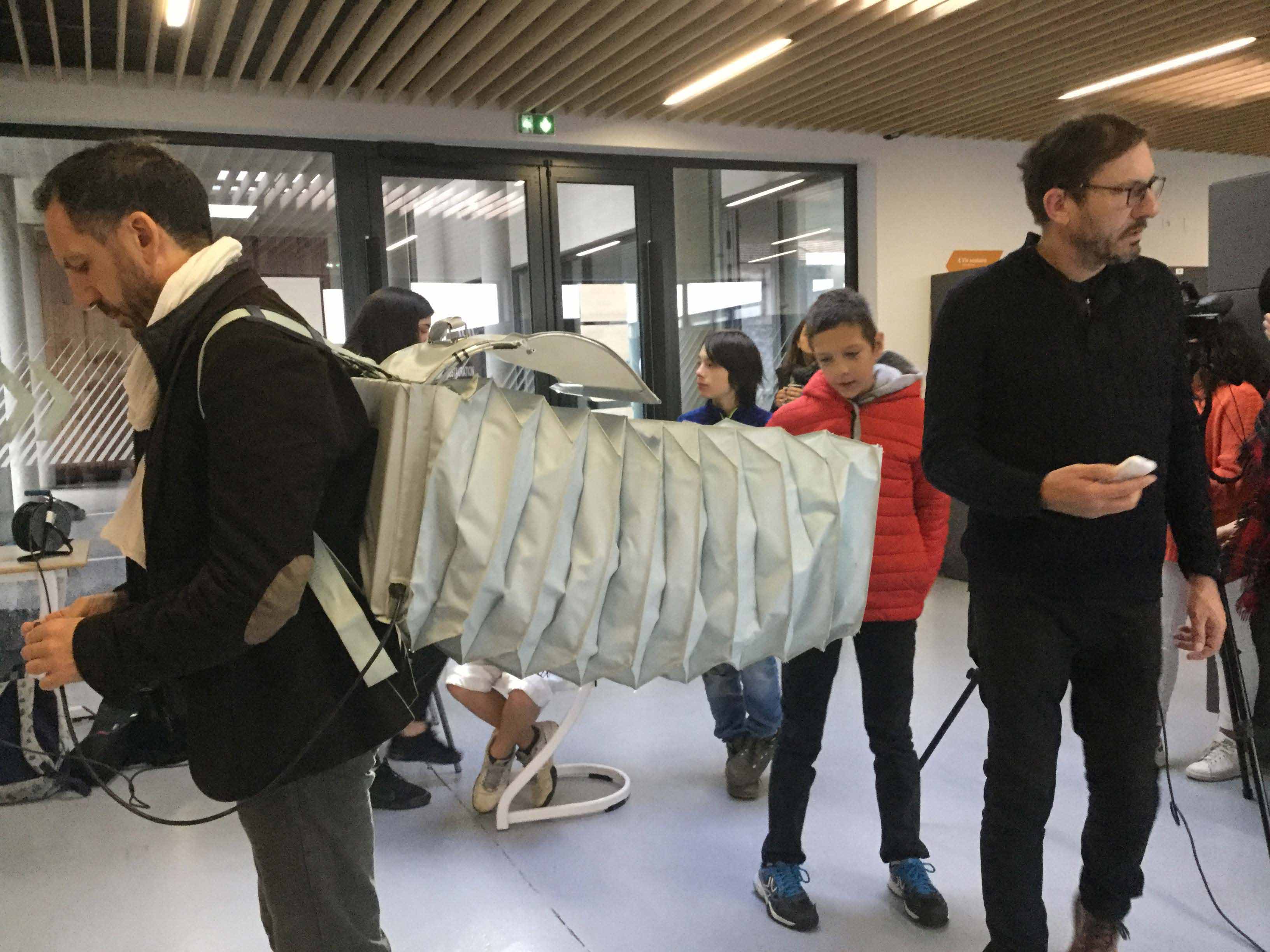 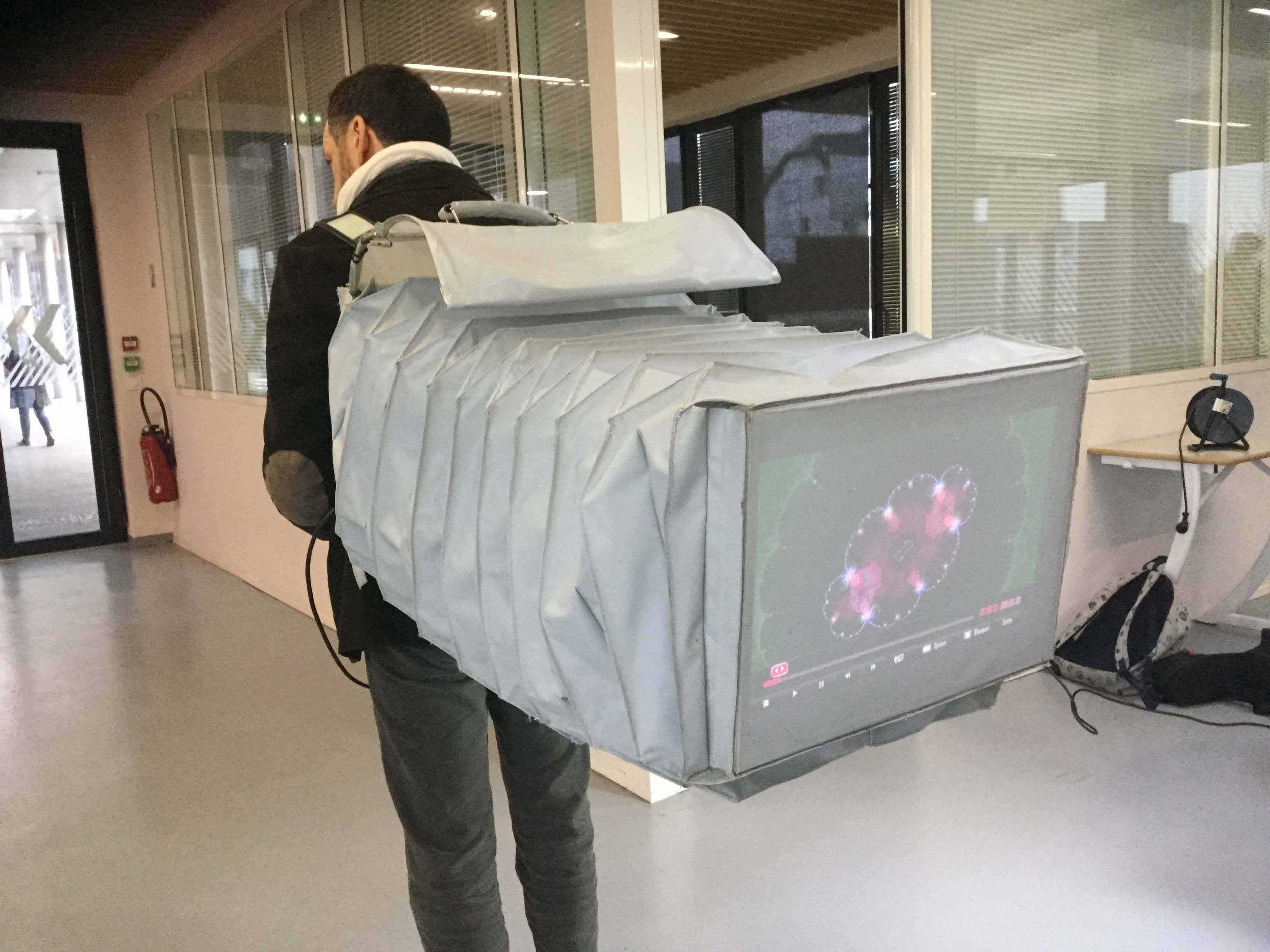 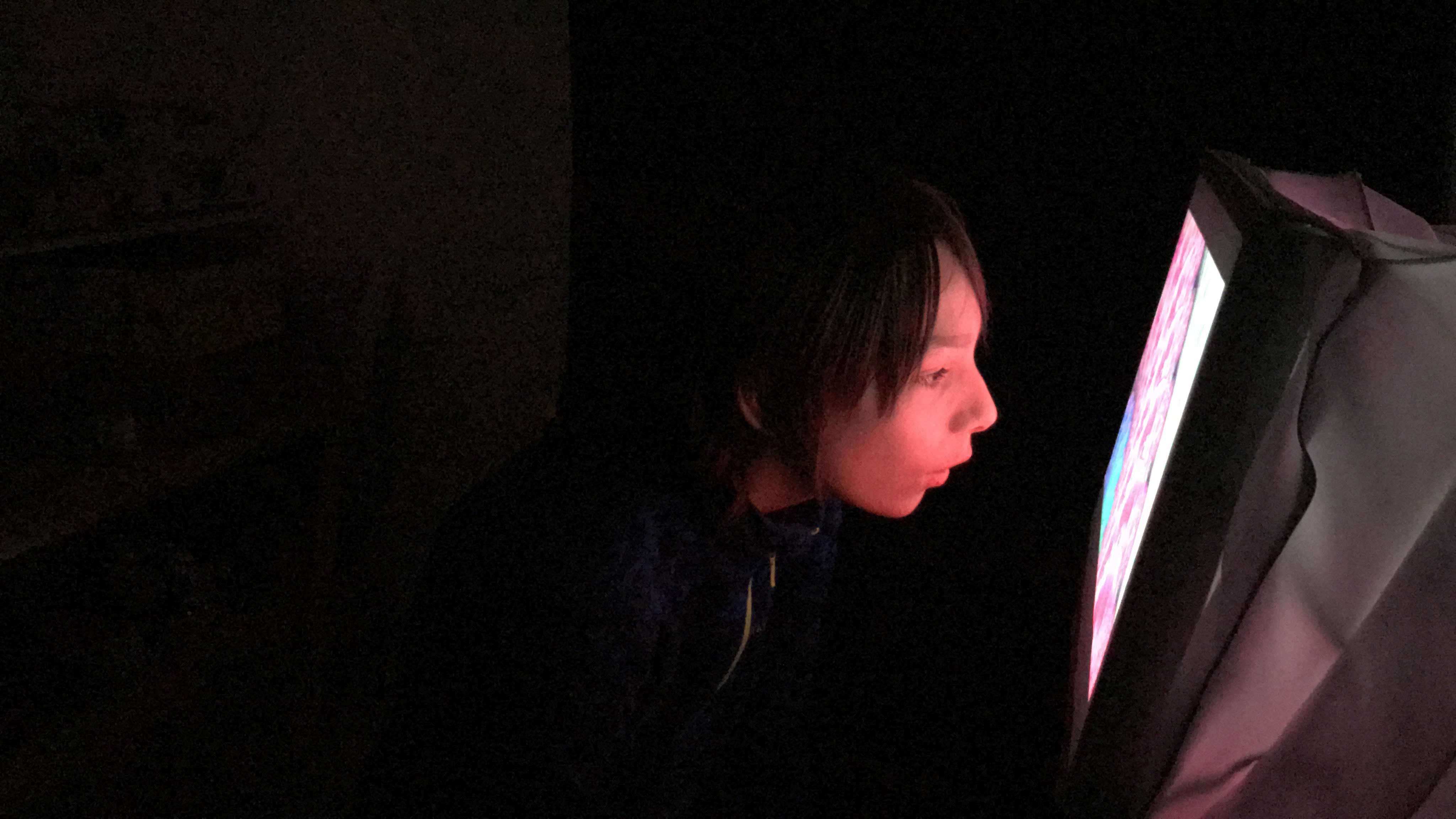 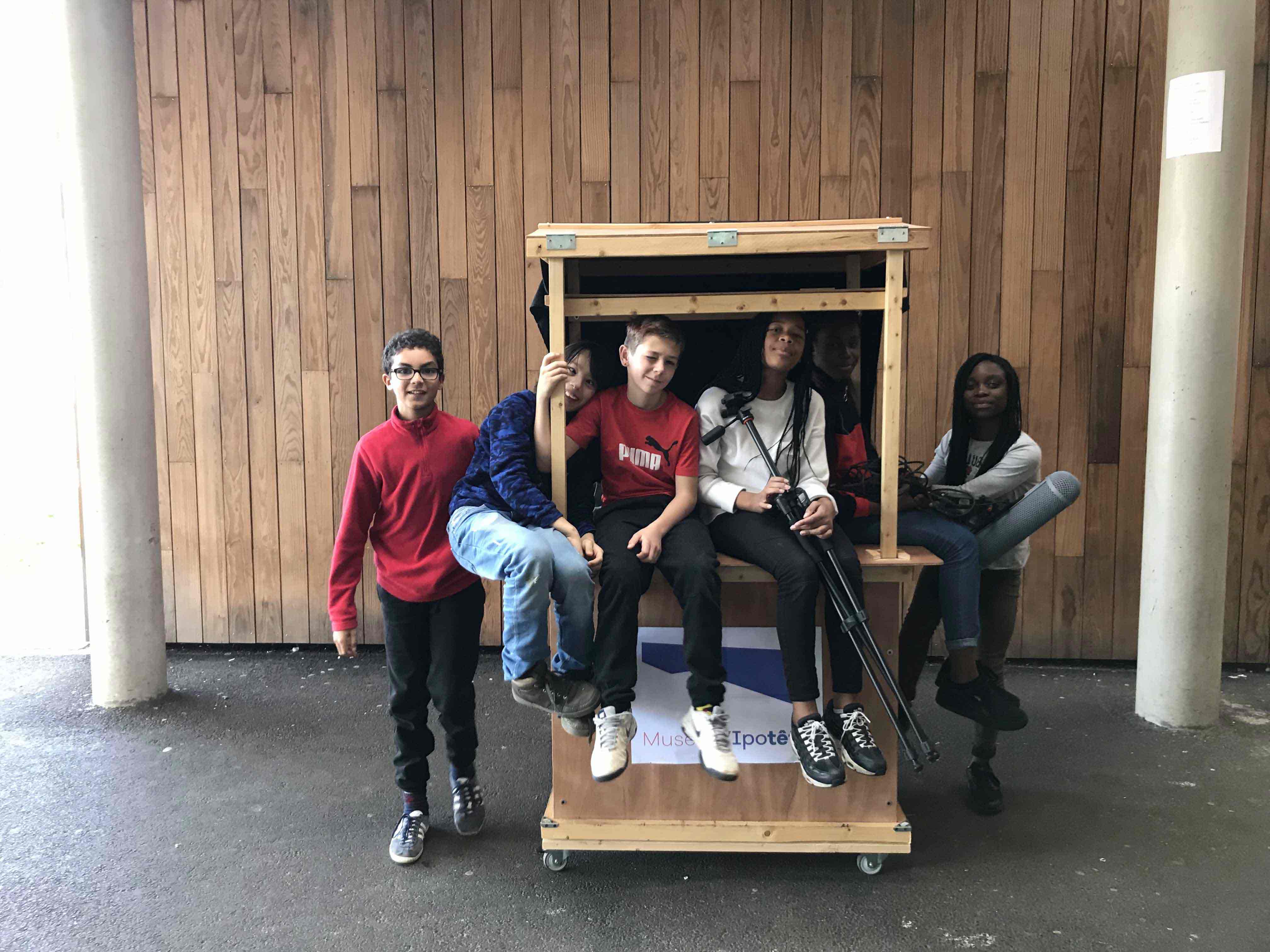 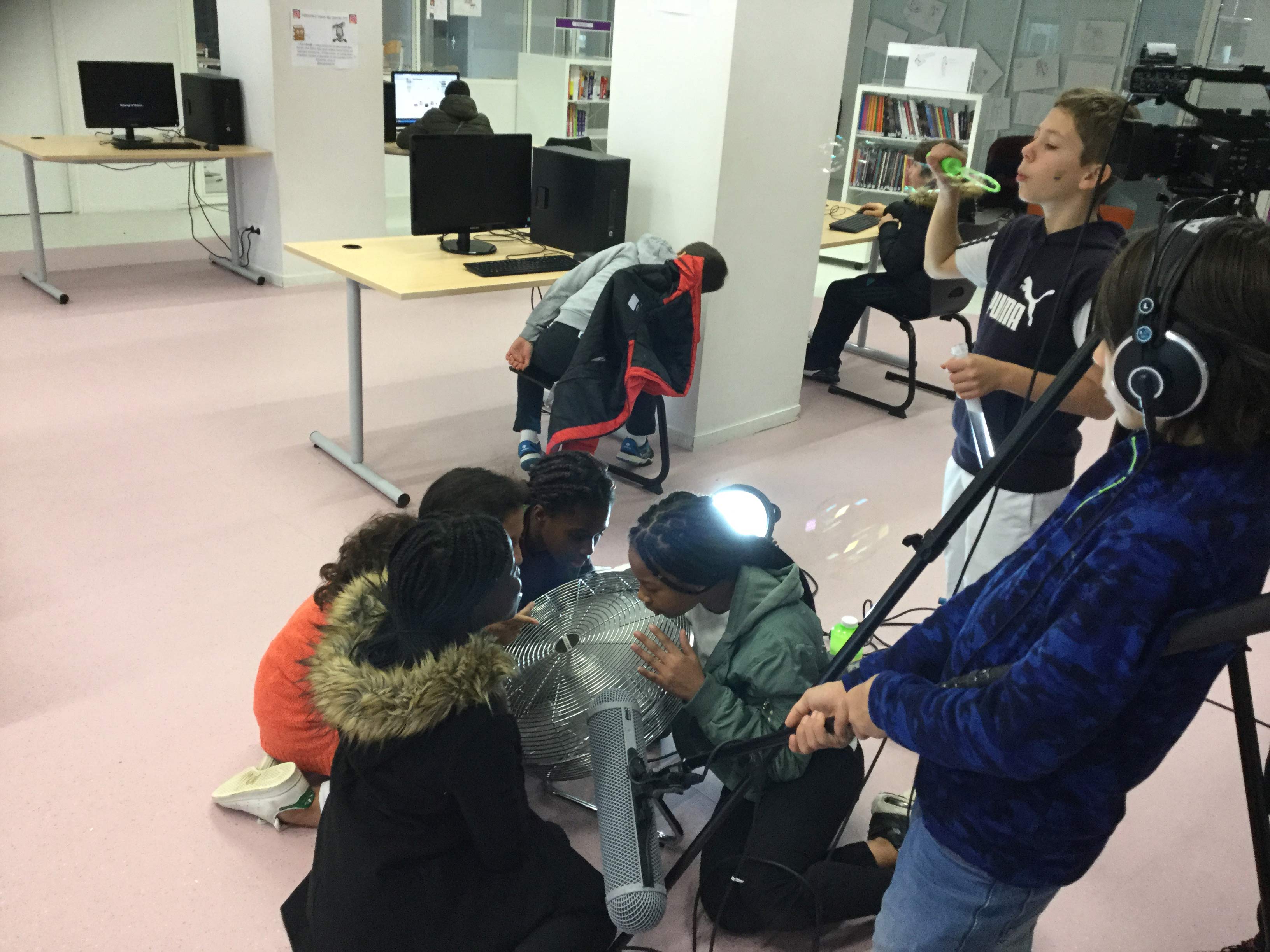 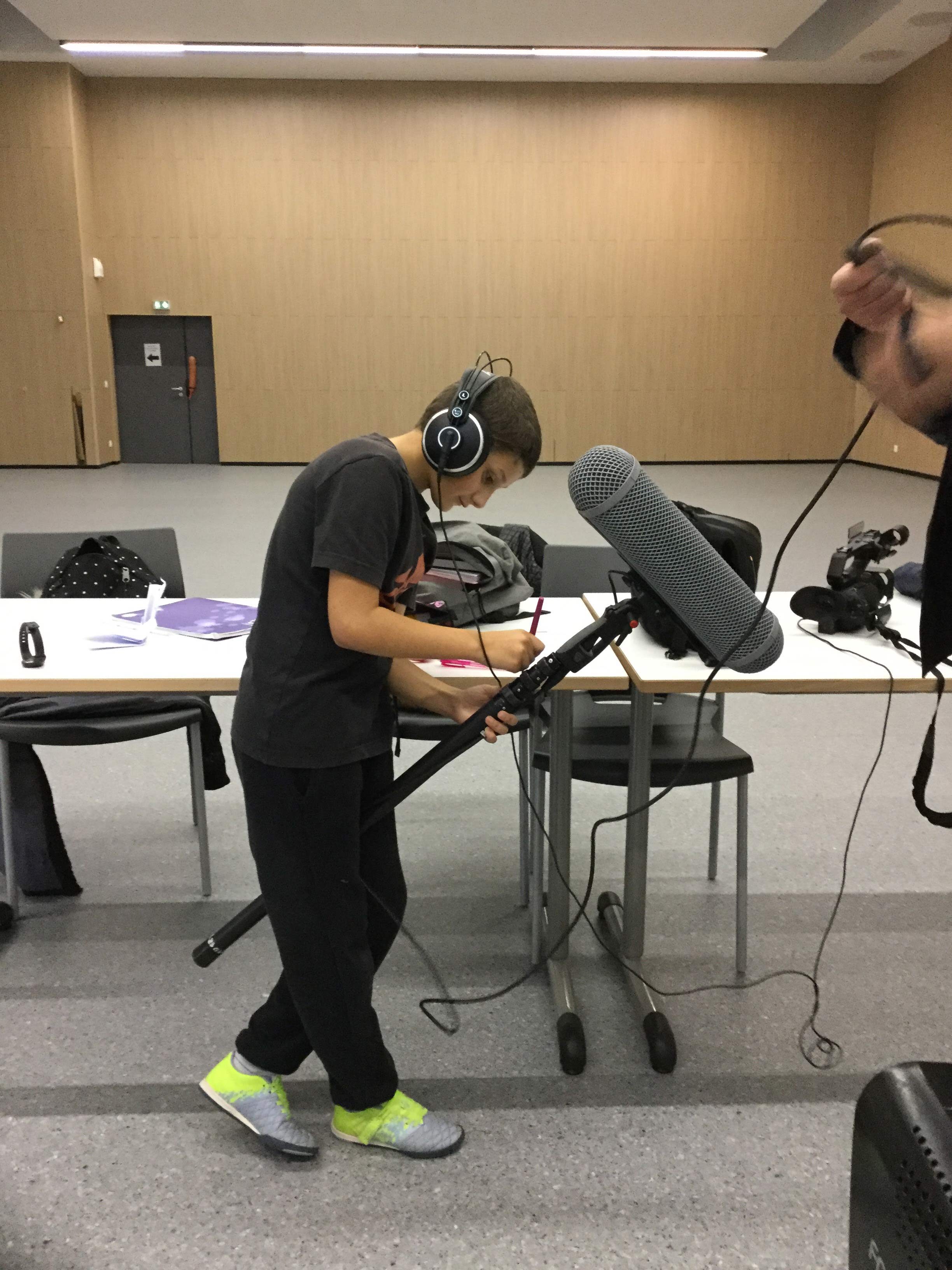